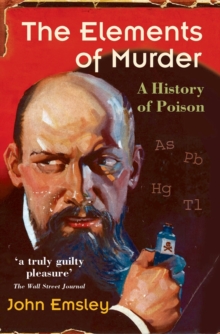 The Elements of Murder : A History of Poison Paperback / softback

This book is about elements that kill. Mercury, arsenic, antimony, lead, and thallium can be lethal, as many a poisoner knew too well.

Emsley explores the gruesome history of these elements and those who have succumbed to them in a fascinating narrative that weaves together stories of true crime, enduring historical mysteries, tragic accidents, and the science behind it all.

Among the intriguing accounts is that of the 17th century poet Sir Thomas Overbury, who survived four attempts to poison him with mercury but died when given the poison in enema form - under whose direction remains uncertain.

Here, too, is detailed the celebratedcase of Florence Maybrick, convicted of poisoning her violent husband James with arsenic, but widely believed at the time to be innocent.

The question of her guilt is still disputed. Threaded through the book alongside the history is the growing understanding of chemistry, and the effects of different chemical substances on the human body.

Thousands suffered the ill effects of poisonous vapours from mercury, lead, and arsenic before the dangers were realized.

Hatters went mad because of mercury poisoning, and hundreds of young girls working in factories manufacturing wallpaper in the 19th century were poisoned by the arsenic-based green pigments used for the leaves of thepopular floral designs.

Even in the middle of the 20th century, accidental mercury poisoning caused many deaths in Minamata Bay, while leaded petrol poisoned the whole planet, and arsenic still continues to poison millions is Asia. Through vividly told stories of innocent blunders, industrial accidents, poisoners of various hues - cold, cunning, desperate - and deaths that remain a mystery, Emsley here uncovers the dark side of the Periodic Table.