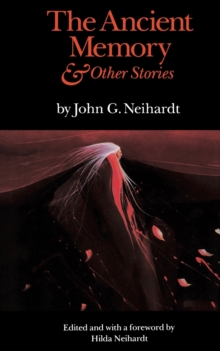 The Ancient Memory and Other Stories Paperback / softback

Death-defying and vulnerable fur-traders and Indians, demi-devils and almost-angels, and other complex personalities come fully to life in The Ancient Memory, which completes the collecting of John G.

Neihardt's early short fiction begun with The End of the Dream and Other Stories. Originally published in popular magazines between 1905 and 1908, these stories about the American frontier illustrated Neihardt's artistry in the short form and foreshadow the themes, situations, and characterizations of his later, better-known work.

Although two of the Indian stories, the ironic "Feather for Feather" and the satirical "A Political Coup at Little Omaha," were collected in The Lonesome Trail in 1907, none has been reprinted since early in the twentieth century. Other stories included here are "Like a Woman," featuring the plucky Pelagie, and "The Face in the Balcony," which is dedicated to "those who have gone through life misunderstood." "The Epic-Minded Scot," about a stranger who is stubbornly idealistic and scrupulous, is considered one of Neihardt's best tales. "The Brutal Fact" revolves around a William Tell type of contest between trapping partners that anticipates Neihardt's Song of Three Friends. "The Lure of Woman," a study of greed and revenge, was expanded into his novel Life's Lure.

Finally, the memorable Waters-an alcoholic, one-legged, one-eyed frontier printer-is introduced in "The Discarded Fetish," which, with minor changes, became the first half of the novel The Dawn-Builder. In her foreword Neihardt's daughter Hilda Neihardt recalls intimate details incidental to the writing of these stories.