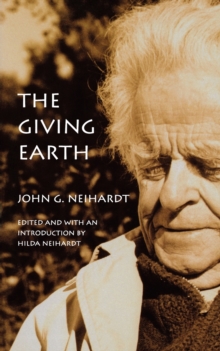 Internationally known for Black Elk Speaks and A Cycle of the West, John G.

The Giving Earth includes nearly forty selections representing every phase of Neihardt's art, from the passionate poetry of his youth to the masterworks of his maturity to the lapidary reflections of his old age.

In her introduction, Hilda Neihardt, who was with her father when he interviewed Black Elk at Pine Ridge, provides many personal details surrounding the publication of his works.

She also introduces each section. Included among the early lyrics are "Let Me Live Out My Years." The short stories that brought him his first fame are represented by "Dreams Are Wiser Than Men" and the memorably horrific "Alien." An excerpt from The River and I documents a trip down the Missouri as atmospheric and eventful as any described by Mark Twain.

The extent of Neihardt's achievement is apparent long before the reader comes to the selections from the classic Black Elk Speaks and the fine, late novel When the Trees Flowered.

Concluding the anthology are selections from the literary criticism that helped form his philosophy of literature and the autobiographical writing of his twilight years.

The Giving Earth is the gift of a writer's generous spirit and unlimited imagination.