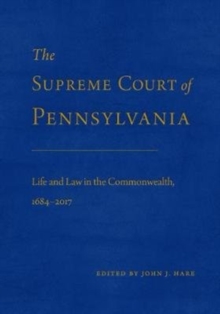 The Supreme Court of Pennsylvania : Life and Law in the Commonwealth, 1684-2017 Hardback

Established in 1684, over a century before the Commonwealth, Pennsylvania's Supreme Court is the oldest appellate court in North America.

This balanced, comprehensive history of the Court examines over three centuries of legal proceedings and cases before the body, the controversies and conflicts with which it dealt, and the impact of its decisions and of the case law its justices createdIntroduced by constitutional scholar Ken Gormley, this volume describes the Supreme Court's structure and powers and focuses at length on the Court's work in deciding notable cases of constitutional law, civil rights, torts, criminal law, labor law, and administrative law.

They consider how it has adjudicated new and complex issues arising from some of the most notable events and tragedies in American history, including the struggle for religious liberty in colonial Pennsylvania, the Revolutionary War, slavery, the Johnstown Flood, the Homestead Steel Strike and other labor conflicts, both World Wars, and, more recently, the dramatic rise of criminal procedural rights and the expansion of tort law. Featuring an afterword by Chief Justice Saylor and essays by leading jurists, deans, law and history professors, and practicing attorneys, this fair-minded assessment of the Court is destined to become a criterion volume for lawmakers, scholars, and anyone interested in legal history in the Keystone State and the United States.