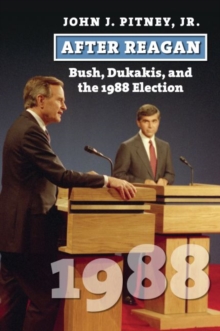 After Reagan : Bush, Dukakis, and the 1988 Election Hardback

Upon the 2018 death of George H. W. Bush, pundits and politicians mourned the passing of an exemplar of the statesmanship and bipartisan ethos of an earlier day.

The judgment, though sound, would have shocked observers of the 1988 election that put Bush in the White House.

From a scholar who played a small role in that long-ago election, After Reagan provides an eye-opening look at a presidential campaign that few suspected marked the end of an era-or the rise of forces roiling our political landscape today. Willie Horton. "Read my lips: No new taxes." Michael Dukakis in a helmet, in a tank.

Though these are remembered as pivotal moments in a presidential campaign recalled as whisker-close, in his book John J.

Pitney Jr. reminds us how large Bush's victory actually was, and how much it depended on social conditions and political dynamics that would change dramatically in the coming years.

A turning point toward the post-Cold War, hyper-partisan, culturally divided politics of our time, the election of 1988 took place in a very different world.

After Reagan captures a moment when campaigns were funded from the federal Treasury; when Republicans had a lock on the presidency and Democrats controlled Congress; when the electorate was considerably whiter and less educated than today's; and when the fall of the Berlin Wall and the Soviet Union-and the subsequent rise of globalization-were virtually unimaginable. Many books tell us that elections have consequences.

Pitney's explains how campaigns are consequential-the 1988 campaign more than most.

From the perspective of the last thirty years, After Reagan shows us the 1988 election in a truly new light-one that, in turn, reveals the links between the campaign of 1988 and the politics of the twenty-first century.