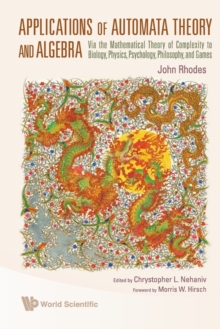 Applications Of Automata Theory And Algebra: Via The Mathematical Theory Of Complexity To Biology, Physics, Psychology, Philosophy, And Games Paperback / softback

This book was originally written in 1969 by Berkeley mathematician John Rhodes.

It is the founding work in what is now called algebraic engineering, an emerging field created by using the unifying scheme of finite state machine models and their complexity to tie together many fields: finite group theory, semigroup theory, automata and sequential machine theory, finite phase space physics, metabolic and evolutionary biology, epistemology, mathematical theory of psychoanalysis, philosophy, and game theory.

The author thus introduced a completely original algebraic approach to complexity and the understanding of finite systems.

The unpublished manuscript, often referred to as "The Wild Book", became an underground classic, continually requested in manuscript form, and read by many leading researchers in mathematics, complex systems, artificial intelligence, and systems biology.

Yet it has never been available in print until now.This first published edition has been edited and updated by Chrystopher Nehaniv for the 21st century.

Its novel and rigorous development of the mathematical theory of complexity via algebraic automata theory reveals deep and unexpected connections between algebra (semigroups) and areas of science and engineering.

Co-founded by John Rhodes and Kenneth Krohn in 1962, algebraic automata theory has grown into a vibrant area of research, including the complexity of automata, and semigroups and machines from an algebraic viewpoint, and which also touches on infinite groups, and other areas of algebra.

This book sets the stage for the application of algebraic automata theory to areas outside mathematics.The material and references have been brought up to date by the editor as much as possible, yet the book retains its distinct character and the bold yet rigorous style of the author.

Included are treatments of topics such as models of time as algebra via semigroup theory; evolution-complexity relations applicable to both ontogeny and evolution; an approach to classification of biological reactions and pathways; the relationships among coordinate systems, symmetry, and conservation principles in physics; discussion of "punctuated equilibrium" (prior to Stephen Jay Gould); games; and applications to psychology, psychoanalysis, epistemology, and the purpose of life.The approach and contents will be of interest to a variety of researchers and students in algebra as well as to the diverse, growing areas of applications of algebra in science and engineering.

Moreover, many parts of the book will be intelligible to non-mathematicians, including students and experts from diverse backgrounds. remove 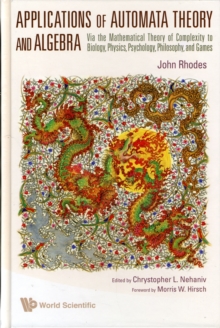 Applications Of Automata Theory And...