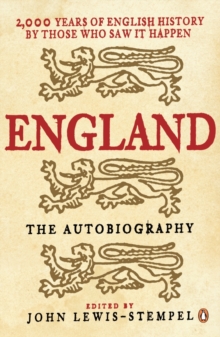 England: The Autobiography : 2,000 Years of English History by Those Who Saw it Happen EPUB

Fountainhead of democracy, engine of the Industrial Revolution, epicentre of the globe's greatest empire and the first-ditch stand against an expansionist Germany in two world wars: England's history is among the most fascinating and influential the world has ever known.

This volume presents that history in unique form: first-hand, through the words of those who saw it and those who made it. All the great events of the last 2,000 years are here: the Norman Conquest, Magna Carta, the Peasants' Revolt, Henry VIII's break with Rome, the Great Fire of London, Nelson at Trafalgar, two world wars. Alongside these are the less obvious happenings which together capture the nation's social history, such as the Black Death of 1349 or life as a chimney sweep in 1817. And of couse there are the things that have shaped the nature of 'Englishness', like theatregoing in Elizabethan London, fox hunting in 1898, Oates's self-sacrifice at the South Pole, the Beatles and the 1966 World Cup.

Presented chronologically and a joy to read whether cover-to-cover or dipped into as a treasury of sources, England: The Autobiography offers an intimate, vivid and revealing portrait of England and the English - and the unique place of both in world history.