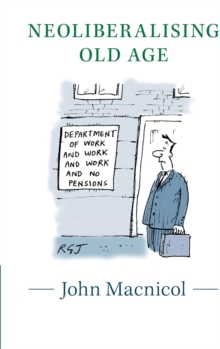 by John (London School of Economics and Political Science) Macnicol

Governments are encouraging later-life working and state pension ages are being raised.

There is also a growing debate on intergenerational equity and on ageism/age discrimination.

John Macnicol, one of Europe's leading academic analysts of old age and ageing, examines the effect of neoliberalism on the recent ageing and social policy agenda in the UK and the USA.

He argues that the demographic and economic impulses behind recent policy changes are in fact less important than the effect of neoliberalism as an ideology, which has caused certain key problems to be defined in a particular way.

The book outlines past theories of old age and examines pensions reform, the debate on life expectancy gains, the causes of retirement, the idea of intergenerational equity, the current debate on ageism/age discrimination and the likely human consequences of raising state pension ages.