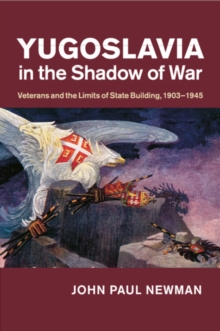 Yugoslavia in the Shadow of War : Veterans and the Limits of State Building, 1903-1945 Paperback / softback

The Yugoslav state of the interwar period was a child of the Great European War.

Its borders were superimposed onto a topography of conflict and killing, for it housed many war veterans who had served or fought in opposing armies (those of the Central Powers and the Entente) during the war.

These veterans had been adversaries but after 1918 became fellow subjects of a single state, yet in many cases they carried into peace the divisions of the war years.

John Paul Newman tells their story, showing how the South Slav state was unable to escape out of the shadow cast by the First World War.

Newman reveals how the deep fracture left by war cut across the fragile states of 'New Europe' in the interwar period, worsening their many political and social problems, and bringing the region into a new conflict at the end of the interwar period.