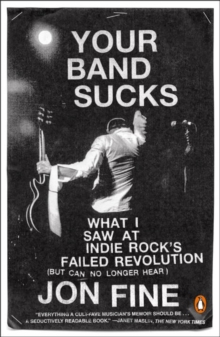 Your Band Sucks : What I saw at Indie Rock's Failed Revolution (But Can No Longer Hear) Paperback / softback

A memoir charting thirty years of the American indie rock underground by a musician who was at its center Jon Fine spent nearly thirty years performing and recording with bands that played aggressive and challenging underground rock music, and, as he writes, at no point were any of those bands ever threatened, even distantly, by actual fame.

Yet when the members of his 1980s post-hardcore band Bitch Magnet came together for an unlikely reunion tour in 2011, diehard fans traveled from far and wide to attend their shows, despite creeping middle-age obligations of parenthood and 9-to-5 jobs. Their devotion was testament to the remarkable staying power of indie culture.

Some bands with a foot in this scene, like REM and Nirvana, eventually attained mainstream success.

Many others, like Bitch Magnet, were beloved only by the most obsessed fans of the time. Your Band Sucks is an insider s look at that fascinating, outrageous culture how it emerged and evolved, how it grappled with the mainstream and vice versa, and its odd rebirth in recent years as countless bands reunited, briefly and bittersweetly.

With backstage access to many key characters on the scene and plenty of wit and sharply worded opinion Fine delivers a memoir that affectionately yet critically portrays an important, heady moment in music history.

Praise for Your Band Sucks Everything a cult-fave musician s memoir should be: It s a seductively readable book that requires no previous knowledge of the author, Bitch Magnet or any other band with which he s played.

Janet Maslin, The New York Times Jon Fine has produced as evocative a portrait of the underground music scene as any wistful, graying post-punk could wish for. 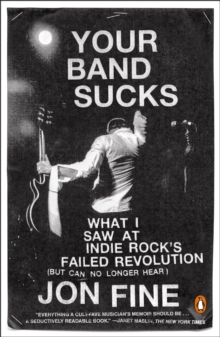