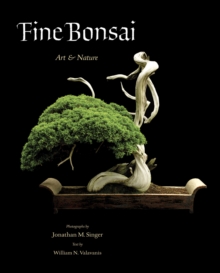 Bonsai trees, with a strong heritage in Japanese tradition, are the artistic miniatures of the plant world.

Combining the natural and the artificial, they are as intricate as they are delicate.

Each bonsai, in addition to resembling a full-size tree, must adhere to Japanese aesthetics of design and presentation, determined by centuries of example.

In other words, bonsai are living sculptures. In this book, acclaimed photographer Jonathan M. Singer showcases over 300 photographs of bonsai taken in some of the most respected private and public collections in the United States and Japan.

Most notably, Singer was granted special permission to photograph the collection of the Omiya Bonsai Art Museum in Japan, considered the Mecca of bonsai, where photography is normally prohibited.

He is the first (and only) photographer in the world to shoot the most famed bonsai trees in Japan, some of which received the coveted Prime Minister's Award.

Singer also had the opportunity to capture the work of Masahiko Kimura, thought to be the most skilled bonsai designer in the world, and artist Seiji Morimae, whose family has worked in horticulture for over 500 years.

Whereas most books on bonsai aim to instruct readers on techniques of care and cultivation, Singer's book takes the reader on a visual journey that focuses on the aesthetic beauty of each featured tree.

Alluring and serene, Singer's photographs make the experience of leafing through Bonsai not unlike entering a real Japanese garden.