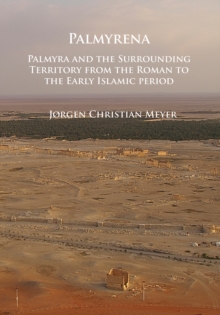 Palmyrena: Palmyra and the Surrounding Territory from the Roman to the Early Islamic period Paperback / softback

This book is the first investigation of the relationship between Palmyra and its surrounding territory from the Roman to the early Islamic period since D.

Schlumberger's pioneer campaigns in the mountains northwest of Palmyra in the late 1930s.

It discusses the agricultural potential of the hinterland, its role in the food supply of the city, and the interaction with the nomadic networks on the Syrian dry steppe.

The investigation is based on an extensive joint Syrian-Norwegian surface survey north of Palmyra in 2008, 2010 and 2011 and on studies of satellite imagery.

It contains a gazetteer of 70 new sites, which include numerous villages, estates, forts, stations and water management systems.