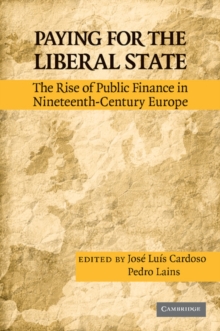 Paying for the Liberal State : The Rise of Public Finance in Nineteenth-Century Europe Paperback / softback

Public finance is a major feature of the development of modern European societies, and it is at the heart of the definition of the nature of political regimes.

Public finance is also a most relevant issue in the understanding of the constraints and possibilities of economic development.

This book is about the rise and development of taxation systems, expenditure programs, and debt regimes in Europe from the early nineteenth century to the beginning of World War I.

Its main purpose is to describe and explain the process by which financial resources were raised and managed.

The volume presents studies of nine countries or empires that are considered highly representative of the widest European experience on the matter and discusses whether there are any common patterns in the way the different European states responded to the need for raising additional resources to pay for the new tasks they were performing.