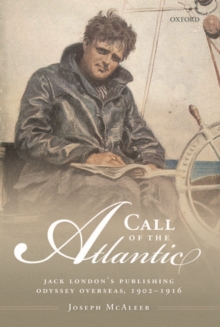 Jack London (1876-1916) is one of the most popular American authors in the world today.

Two novels, The Call of the Wild and White Fang, are regarded as literary classics and have never been out of print.

His forty-four published books, and hundreds of short stories and essays have been translated into more than 100 languages and hailed by critics worldwide.

A vigorous self-promoter and the kind of media celebrity we would recognize today, Londonwas America's first novelist to earn more than one million dollars a year from his writing (in today's currency). Call of the Atlantic reveals a side of London's life that has been largely overlooked by academics and critics, yet is essential to understanding the character, drive, and success of this extraordinary man - namely, London's publishing odyssey overseas.

Joseph McAleer considers how London achieved international fame, and the part that he played in engineering his own success.

What makes London's dealings overseas especially interesting is that he made his own decisions, unlike many ofhis contemporaries who depended upon the good will of their agents and publishers.

Through correspondence, McAleer reveals London's conversations and transactions, as well as the misunderstandings caused when letters (which could take up to three weeks to arrive) crossed in the mail.

Emotions ran high, asdid the constant need for money, and the picture that emerges of London is not a pretty one.

It was his way or nothing as he played what he called the 'writing game' right through to his premature death, aged forty.