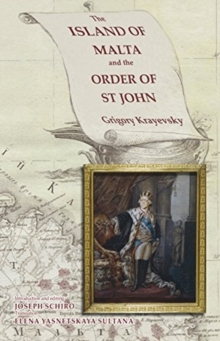 The Islands of Malta and the Order of St John : Grigory Krayevsky Hardback

The book, in two parts, was written by Grigory Krayevsky (1747-1802, St Petersburg) and published in St Petersburg by the Imperial Academy of Sciences in the year 1800.

It is an account of Krayevsky's trip to Malta in 1785 as a translator "in the non-hazardous expedition" of Count Paul Martinovitch Skavronsky (1757-1793), who was then the Russian Ambassador to Naples.

The first part describes in detail the history of the island of Malta, its main attractions, and the life and traditions of the locals.

The second part deals with the history of the Order of Malta since 1530.

When in 1799 the Russian Emperor Paul I become the Grand Master of the Order of the Knights of St John, Krayevsky seized the opportunity to publish his travel log and account of Malta and presented the Emperor with the hand-written version of the book.

The Emperor found the contents of the book very interesting and sponsored its publication and distribution. The book contains an absolutely unique map, that has an importance of its own because it is the only known Russian printed map of the Maltese Islands of that era.

Besides, it is a very rare map because the book in which it appeared is extremely difficult to find.

It is also one of the few travel accounts written by a non-European.