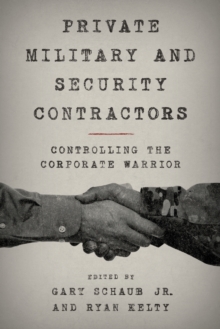 In Private Military and Security Contractors (PMSCs) a multinational team of scholars and experts address a developing phenomenon: controlling the use of privatized force by states in international politics.

Robust analyses of the evolving, multi-layered tapestry of formal and informal mechanisms of control address the microfoundations of the market, such as the social and role identities of contract employees, their acceptance by military personnel, and potential tensions between them.

The extent and willingness of key states-South Africa, the United States, Canada, the United Kingdom, and Israel-to monitor and enforce discipline to structure their contractual relations with PMSCs on land and at sea is examined, as is the ability of the industry to regulate itself.

Also discussed is the nascent international legal regime to reinforce state and industry efforts to encourage effective practices, punish inappropriate behavior, and shape the market to minimize the hazards of loosening states' oligopolistic control over the means of legitimate organized violence.

The volume presents a theoretically-informed synthesis of micro- and macro-levels of analysis, offering new insights into the challenges of controlling the agents of organized violence used by states for scholars and practitioners alike.