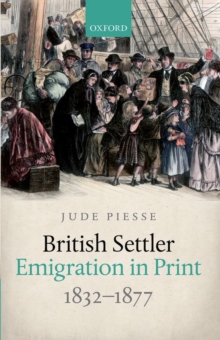 An unprecedented number of emigrants left Britain to settle in America, Australia, Canada, and New Zealand during the Victorian period.

It presents extensive newresearch on how settler emigration was registered within Victorian periodicals and situates its focus on British texts and contexts within a broader, transnational framework.

The book argues that the Victorian periodical was an inherently mobile form which had an unrivalled capacity to both register mass settleremigration and moderate its disruptive potential.

These genres are cohesive, domestic, and reassuring, and thus of a different character from the adventure stories often associated with Victorian empire.

Ultimately, the book shows howperiodical settler emigration literature transforms our understanding of both the culture of Victorian empire and Victorian literature and culture as a whole.

It also makes significant intersections into debates about periodical form and the role of digitization within Victorian Studies.