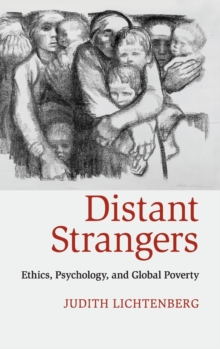 What must affluent people do to alleviate global poverty?

This question has occupied moral and political philosophers for forty years.

But the controversy has reached an impasse: approaches like utilitarianism and libertarianism either demand too much of ordinary mortals or else let them off the hook.

In Distant Strangers, Judith Lichtenberg shows how a preoccupation with standard moral theories and with the concepts of duty and obligation have led philosophers astray.

She argues that there are serious limits to what can be demanded of ordinary human beings, but this does not mean we must abandon the moral imperative to reduce poverty.

Drawing on findings from behavioral economics and psychology, she shows how we can motivate better-off people to lessen poverty without demanding unrealistic levels of moral virtue.

Lichtenberg argues convincingly that this approach is not only practically, but morally, appropriate.