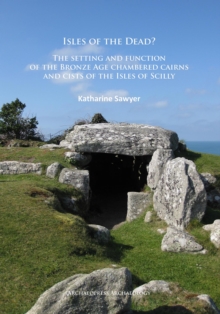 Isles of the Dead? : The setting and function of the Bronze Age chambered cairns and cists of the Isles of Scilly Paperback / softback

The number and density of megalithic chambered cairns in the Isles of Scilly, a tiny archipelago that forms the most south-westerly part of the British Isles, has been remarked upon since the 18th century.

Isles of the Dead? examines these sites, generally known as entrance graves, and the associated cist graves.

Their physical structure and contents, as well as their landscape setting, orientation and inter-visibility, are discussed.

The origins and functions of the monuments and their significance to the communities that built and used them are also considered.

The findings indicate that the entrance graves were indeed used for burial and that a wide range of grave goods, including prestige items, were placed in them.

The pottery, in particular, shows the development of a specific island identity.

The first radiocarbon determinations from the graves suggest a period of use between c2000 and 1250 cal BC.

This coincides with the inundation of large areas of low-lying land in the islands and suggests that the construction of entrance graves may have been regarded as a way of 'holding the line' against the depredations of the sea.