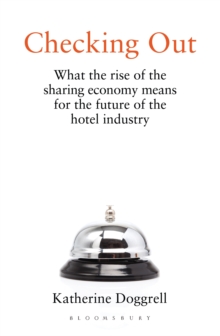 Checking Out : What the Rise of the Sharing Economy Means for the Future of the Hotel Industry Hardback

As one of the world's most established industries, the hotel sector has remained relatively unchanged and unchallenged for decades.

Yet traditional hotels have recently come under increasing pressure on two major fronts: from disruptors in the sharing economy such as Airbnb, and by a rising wave of modern consumers who have become re-educated by social media and hotel comparison websites.

Can this traditionally slow-moving sector reinvent itself or will it become increasingly marginalized?

Global hotel chains are catching up to modern trends - adding technologized curation and personalisation to their offerings.

In Checking Out, Katherine Doggrell interviews key figures in the hotel industry and draws upon various case studies to explore the ways in which this traditionalist industry can remain relevant in the 21st century.

The hotel 'experience' has been redefined, as guests now value fast Wi-Fi and mobile check-ins over room service and mini-fridges. Checking Out is an engaging investigation into the unprecedented challenges that face the hotel sector in the digital era and the strategies that are being employed by its leaders and innovators.