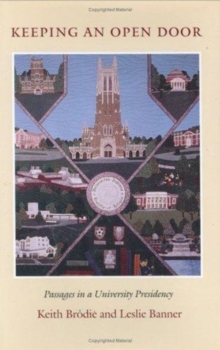 Keeping An Open Door : Passages in a University Presidency Hardback

During the 1980s, many of America's most respected colleges and universities suffered financial crises, athletic scandals, a troubling upsurge of racial conflict, and the divisiveness of political correctness "wars." Yet Duke University not only avoided these dangers but changed dramatically from a very good regional university to one of the nation's top research institutions.

Its undergraduate campus was hailed as a "hot college"; its Blue Devils basketball team was pronounced a model for student athletes; its graduate and professional schools gained new national prominence; and its scholars were quoted frequently in the popular press on both sides of the political correctness debates. In Keeping an Open Door, Duke chancellor (1982-1985) and president (1985-1993) Keith Brodie and coauthor Leslie Banner recount what it was like to lead Duke during an era of change for research universities across the country: how Brodie reached some of his most controversial decisions, including the "Black Faculty Initiative"; his strategy for precluding abuse in Division I athletics at Duke; how his training as a psychiatrist shaped his leadership style and influenced how he dealt with trustees, deans, faculty, and students; and the avenues of power still open to today's university presidents.

The history and feeling of life on the Duke campus during the Brodie era are vividly evoked in photographs and key speeches introduced by the former president's personal recollections. Keeping an Open Door provides an insider's view of issues critical to modern research universities and will interest anyone concerned with the history and future of higher education.