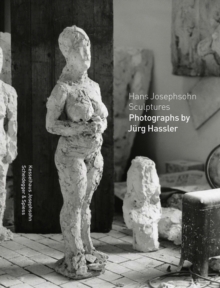 As a boy, photographer and filmmaker Jurg Hassler passed the studio of sculptor Hans Josephsohn every day on his way to school.

Watching the artist working captivated him, and once he had finished school in the late 1950s, Hassler began working as Josephsohn's assistant and apprentice, eventually becoming a sculptor himself.

After studying photography and taking up filmmaking as well, he occupied himself with Josephsohn's sculptural work also with the camera, resulting in countless images and the film portrait Josephsohn: Stein des Anstosses (Josephsohn: Bone of Contention), which was released in 1977. This new book features a selection of photographs by Jurg Hassler, who predominantly works in black-and-white.

Many of them have single sculptures by Hans Josephsohn as a motif, highlighting the artist's strong archaic expressiveness.

Nina Keel's essay takes a closer look at the context of Hassler's photographic engagement with the art of his teacher. The Kesselhaus Josephsohn in St. Gallen, Switzerland, is an exhibition space dedicated to the work of Hans Josephsohn.