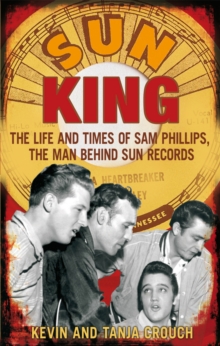 Sun King : The Life and Times of Sam Phillips, The Man Behind Sun Records Paperback / softback

Music producer Sam Phillips and his landmark studio, Sun Records, hold a unique place in the history of rock 'n' roll - by many accounts, before Phillips recorded 'Rocket 88' by Jackie Brenston and his Delta Cats in 1951, rock 'n' roll as we know it didn't even exist.

The list of musical legends that passed through the doors of Sun Records is simply astounding, including BB King, Ike Turner, Johnny Cash, Roy Orbison, Jerry Lee Lewis and more.

SUN KING strips away the glossy veneer of legend around the Phillips story - which, like his signature sound, was much the result of his own careful crafting - to reveal a man who, from a very young age, heard a musical sound that no one else heard.

Complete with a full Sun Records discography, 'Sun King' is an indispensable document in the history of rock music.