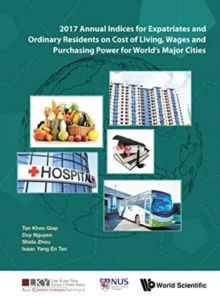 2017 Annual Indices For Expatriates And Ordinary Residents On Cost Of Living, Wages And Purchasing Power For World's Major Cities Hardback

This book provides a valuable compendium of annual indices and rankings of cost of living for expatriates and cost of living, wages and purchasing power for ordinary residents in 105 world's major cities over the period 2005-2015.

Now in its third edition, the ACI's study reflects salient differences in costs of living for expatriate and ordinary urban dwellers which arise from variations in their lifestyles and consumption preferences.

This is of critical significance as cost of living for the former is usually conflated as that for the latter by the general public.