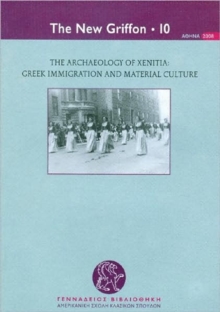 Part of the New Griffon series

Between 1900 and 1915, a quarter of the working-age male Greek population immigrated to the United States, Canada, and Australia.

The historical enterprise of Greek immigration in the 20th century, however, has lacked a significant archaeological voice.

In this volume, new archaeological data from Epeiros, Kythera, Keos, the Southern Argolid, and the Nemea Valley highlight the effects of emigration, and data from Colorado, Philadelphia, and Sydney illustrate the effects of immigration.

Abandoned households were coupled with new foundations, while a fluid transmission of moneys and resources created networks of goods and meanings far more complex than the traditional model of assimilation, economic prosperity, or the melting pot.

Greek archaeology played a double role in constructing native and foreign ideologies, ranging from church foundations in the 1920s (Greek community in Philadelphia) to film productions for the war relief effort in the 1940s (documentary produced and newly restored by the American School).

Finally, we see how excavated ruins inform current narratives of discovery and homecoming in a granddaughter's memoir that layers personal and textual lives with a rebuilt house.

Such metanarratives (factual and idealized) reveal deep entanglements between archaeologist and immigrant.