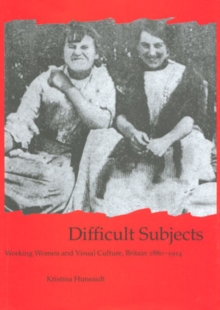 The working women of Victorian and Edwardian Britain were fascinating but difficult subjects for artists, photographers, and illustrators.

The cultural meanings of labour sat uncomfortably with conventional ideologies of femininity, and working women unsettled the boundaries between gender and class, selfhood and otherness.

From paintings of servants in middle-class households, to exhibits of flower-makers on display for a shilling, the visual culture of women's labour offered a complex web of interior fantasy and exterior reality.

The picture would become more challenging still when working women themselves began to use visual spectacle. In this first in-depth exploration of the representation of British working women, Kristina Huneault explores the rich meanings of female employment during a period of labour unrest, demands for women's enfranchisement, and mounting calls for social justice.

In the course of her study she questions the investments of desire and the claims to power that reside in visual artifacts, drawing significant conclusions about the relationship between art and identity.