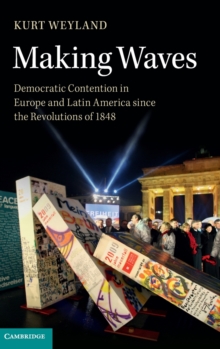 Making Waves : Democratic Contention in Europe and Latin America since the Revolutions of 1848 Hardback

This study investigates the three main waves of political regime contention in Europe and Latin America.

Surprisingly, protest against authoritarian rule spread across countries more quickly in the nineteenth century, yet achieved greater success in bringing democracy in the twentieth.

To explain these divergent trends, the book draws on cognitive-psychological insights about the inferential heuristics that people commonly apply; these shortcuts shape learning from foreign precedents such as an autocrat's overthrow elsewhere.

But these shortcuts had different force, depending on the political-organizational context.

In the inchoate societies of the nineteenth century, common people were easily swayed by these heuristics: jumping to the conclusion that they could replicate such a foreign precedent in their own countries, they precipitously challenged powerful rulers, yet often at inopportune moments - and with low success.

By the twentieth century, however, political organizations had formed.

As organizational ties loosened the bounds of rationality, contentious waves came to spread less rapidly, but with greater success.