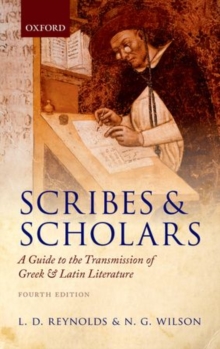 Scribes and Scholars : A Guide to the Transmission of Greek and Latin Literature Hardback

One of the remarkable facts about the history of Western culture is that we are still in a position to read large amounts of the literature produced in classical Greece and Rome despite the fact that for at least a millennium and a half all copies had to be produced by hand and were subject to the hazards of fire, flood, and war. This book explains how the texts survived and gives an account of the reasons why it was thought worthwhile to spend the necessary effortto preserve them for future generations. In the second edition a section of notes was included, and a new chapter was added to deal with some aspects of scholarship since the Renaissance.

In the third edition (1991), the authors responded to the urgent need to take account of the very large number of discoveries in this rapidly advancing field of knowledge by substantially revising or enlarging certain sections.

The last two decades have seen further advances, and this revised edition is designed to take account of them.