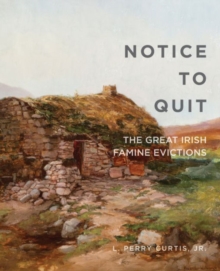 Ireland's Great Hunger Museum at Quinnipiac University publishes Famine Folios, a unique resource for students, scholars and researchers, as well as general readers, covering many aspects of the Famine in Ireland from 1845-1852 - the worst demographic catastrophe of nineteenth-century Europe.

The essays are interdisciplinary in nature, and make available new research in Famine studies by internationally established scholars in history, art history, cultural theory, philosophy, media history, political economy, literature and music.During the peak years of the great famine at least 750,000 men, women, and children died from either starvation or disease.

At the same time roughly 350,000 individuals were driven out of their dwellings.

This ominous drain of humanity continued at a slower rate well into the twentieth century.Whereas nature could be blamed for the lethal effects of acute hunger or malnutrition, human agency caused much of this devastating loss owing to mass evictions of the poorest tenants and squatters after the agent or bailiff had served them with the dreaded Notice To Quit. This richly illustrated pamphlet seeks to contextualize the mass evictions by focussing on the ideological and economic factors as well as the role of religious and racial prejudice in prompting owners to rid their estates of what was known as a "surplus population." Determined to avoid paying for the maintenance of unprofitable tenants and squatters, landlords sought to avoid insolvency by expelling these pauperized peasants.

After destroying their cabins, they consolidated all these small holdings into larger farms or cattle ranches that were rented to solvent tenants.

Relying on the laws governing land tenure, letting contracts, and rent, these landlords used the mechanism of eviction to ensure that their estates would become profitable enough to pay for their own privileged way of life.Whether or not the victims of eviction received private or public assistance to emigrate overseas, the results of these clearances were much the same.

Thousands of acres were converted to pasturage in parts of Munster and Connaught and small villages or clachans were abandoned.

Only the skeletal remains of stone cottages remained - some of which can still be seen today.No wonder that many Irish contemporaries called the evictors "exterminators. "