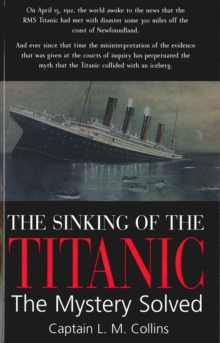 Sinking of the Titanic : The Mystery Solved Paperback / softback

Despite the hundreds of books written about the 'night to remember' few of their authors have had any nautical experience.

His practical expertise and years of experience gives him a unique background (a background few other writers can bring to this subject) with which to re-examine the evidence from the original court of inquiry into the Titanic disaster in 1912. Fundamental misinterpretations of the evidence given to the inquiries on the sinking of the Titanic have perpetuated the myth that Titanic collided with an iceberg. Captain Collins has gone back to the original records and to the statements of Titanic's surviving crew to determine if the disaster was caused by the shocking professional incompetence and negligence by Captain Smith (the ship's captain) and his experienced crew.

He has discovered the truth of, a secret that has been hidden in the overlooked accounts of professional sailors for almost 100 years.

Only another sailor could have unravelled this mystery and exonerated Titanic's crew. Illustrated through-out, including artist's impressions used for publicity purposes before the construction of the Titanic and photographs taken during the ship's only voyage, The Sinking of the Titanic re-interprets the history of the disaster while solving many of the century-old mysteries that surround this mythical ship.