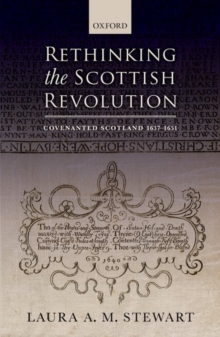 The English revolution is one of the most intensely-debated events in history; parallel events in Scotland have never attracted the same degree of interest.

Rethinking the Scottish Revolution argues for a new interpretation of the seventeenth-century Scottish revolution that goes beyond questions about its radicalism, and reconsiders its place within an overarching 'British' narrative. In this volume, Laura Stewart analyses how interactions between print and manuscript polemic, crowds, and political performances enabled protestors against a Prayer Book to destroy Charles I's Scottish government.

Particular attention is given to the way in which debate in Scotland was affected by the emergence of London as a major publishing centre.

The subscription of the 1638 National Covenant occurred within this context and further politicized subordinate social groups that included women. Unlike in England, however, public debate was contained.

A remodelled constitution revivified the institutions of civil and ecclesiastical governance, enabling Covenanted Scotland to pursue interventionist policies in Ireland and England - albeit at terrible cost to the Scottish people.

War transformed the nature of state power in Scotland, but this achievement was contentious and fragile.

A key weakness lay in the separation of ecclesiastical and civil authority, which justified for some a strictly conditional understanding of obedience to temporal authority.

Rethinking the Scottish Revolution explores challenges to legitimacy of the Covenanted constitution, but qualifies the idea that Scotland was set on a course to destruction as a result.

Covenanted government wasoverthrown by the new model army in 1651, but its ideals persisted.

In Scotland as well as England, the language of liberty, true religion, and the public interest had justified resistance to Charles I.

The Scottish revolution embedded a distinctive and durable political culture that ultimately provedresistant to assimilation into the nascent British state.