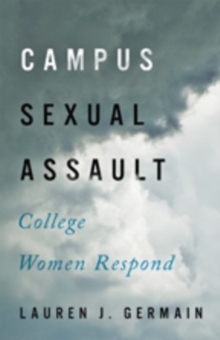 A 2014 report issued by the White House Council on Women and Girls included the alarming statistic that one in five female college students in the United States experience some form of campus sexual assault.

Despite more than fifty years of anti-rape activism and over two decades of federal legislation regarding campus sexual violence, sexual assault on American college and university campuses remains prevalent, under-reported, and poorly understood.

A principle reason for this lack of understanding is that the voices of women who have experienced campus sexual assault have been largely absent from academic discourse about the issue. In Campus Sexual Assault, Lauren J. Germain focuses attention on the post-sexual assault experiences of twenty-six college women.

She reframes conversations about sexual violence and student agency on American college campuses by drawing insight directly from the stories of how survivors responded individually to attacks, as well as how and why peers, family members, and school, medical, and civil authorities were (or were not) engaged in addressing the crimes. Germain weaves together women's narratives to show the women not as victims per se, but as individuals with the power to overcome these traumatic experiences.

Aimed at students, parents, faculty members, university leaders, service providers, and lawmakers, Campus Sexual Assault seeks to put an end to the silence around sexual trauma by giving voice to those closest to it and providing tools for others to hear with-and to act on.