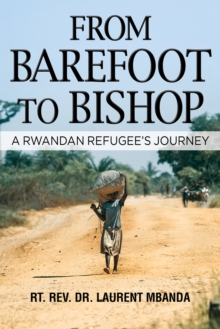 From Barefoot to Bishop : A Rwandan Refugee's Journey Hardback

From Barefoot to Bishop is a compelling story of faith, from being saved to being of service.

This memoir will inspire church leaders and laity alike, and it will appeal to those with a passion to living a life with a mission. In November 1959, Ethnic tensions in the East African Nation of Rwanda ignited what would become the first wave of deadly organized masacres against the Tutsi in Rwanda and a precursor to the horrific Genocide of 1994 in which a million or more Rwandans were killed in a hundred days.

But on that day in 1959, a five-year-old boy named Laurent Mbanda knew only three things: first, that the air was filled with smoke; second, that his father was missing; and third, that his frightened mother was telling him they had to run and hide.

Soon, Mbanda would become one of tens of thousands of Rwandan children literally running for their lives, one of the many children who would grow up in refugee camps amid dire poverty and hunger. From one refugee camp to another in Burundi, Mbanda and his family faced deprivation and near-constant discrimination because of their refugee status.

Despite bitter hardships and setbacks, Mbanda never lost his faith.