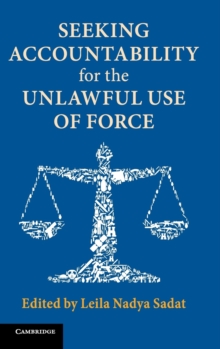 Seeking Accountability for the Unlawful Use of Force Hardback

Despite the conclusion of the International Military Tribunal at Nuremberg that aggression is the 'supreme international crime', armed conflict remains a frequent and ubiquitous feature of international life, leaving millions of victims in its wake.

This collection of original chapters by leading and emerging scholars from all around the world evaluates historic and current examples of the use of force and the context of crimes of aggression.

As we approach the 75th anniversary of the Nuremberg War Crimes Tribunal, Seeking Accountability for the Unlawful Use of Force examines the many systems and accountability frameworks which have developed since the Second World War.

By suggesting new avenues for enhancing accountability structures already in place as well as proposing new frameworks needed, this volume will begin a movement to establish the mechanisms needed to charge those responsible for the unlawful use of force.