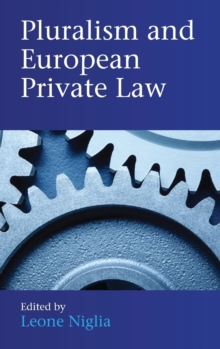 European private law has hitherto tended to be conceptualised firmly around ideas of unity and harmony.

This book seeks to bridge the gap between 'public' and 'private' law by looking at European private law from various pluralist positions and by investigating old and new ways in which to understand legal pluralism in general.

It fills a gap in the wide literature on legal pluralism, as the first book entirely dedicated to offering an insight into legal pluralism from the vantage point of the private law domain.

The book addresses critically issues such as what pluralism really means in private law and what conceptions of pluralism it embodies, including discussion about the outer boundaries of any of the pluralist understandings.

The book provides an opportunity to engage innovatively with problematic conceptual issues which inform the work of European private law scholars, including the debate on the Common Frame of Reference Poject of the European Commision.