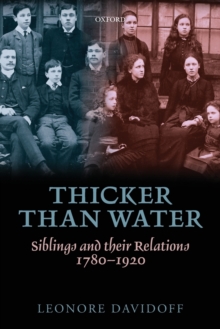 Thicker than Water : Siblings and their Relations, 1780-1920 Paperback / softback

The particular focus of the book is on Britain and its middle classes, who were at its core, and the role of family networks created through sibling relationships. Leanore Davidoff examines what we know about the relationships of brothers and sisters at this time, before delving deeper, looking at their uses and meaning for British middle class families, how they operated within the economic, social, cultural, and religious constraints of their place and time, and how they changed as families became smaller from the end of the nineteenth century onwards.