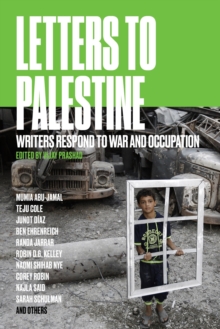 In the wake of Israel's recent bombing of Gaza, polls revealed a startling fact: for the first time, a majority of Americans under thirty found Israel's actions unjustified.

Jon Stewart aired a blistering attack on Israeli violence, and a video of a UN spokesperson weeping as he was interviewed in Gaza went viral, appearing on Vanity Fair and Buzzfeed, among other sites.

This book traces this swelling recognition of Palestinian suffering, struggle, and hope, in writing that is personal, lyrical, anguished, and hopeful.

Some of the leading American writers of our time, such as Junot Diaz and Teju Cole, along with musicians like Chuck D and Palestinian American artists like Naomi Shihab Nye, give voice to feelings of empathy and solidarity - and anger at US support for Israeli policy - in intimate letters, beautiful essays, and furious poems.

This will be a landmark work of controversial, committed literary writing.