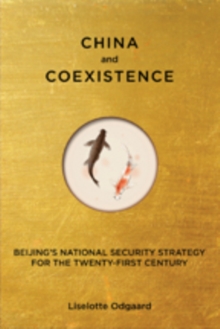 "Peaceful coexistence", long a key phrase in China's strategic thinking, is a constructive doctrine that offers China a path for influencing the international system.

So argues Liselotte Odgaard in this timely analysis of China's national security strategy in the context of its foreign policy practice.

China's program of peaceful coexistence emphasizes absolute sovereignty and non-interference in the internal affairs of other states.

Odgaard suggests that China's policy of working within the international community and with non-state actors such as the UN aims to win for China greater power and influence without requiring widespread exercise of military or economic pressure.

Odgaard examines the origins of peaceful coexistence in early Soviet doctrine, its midcentury development by China and India, and its ongoing appeal to developing countries.

She reveals what this foreign policy offers China through a comparative study of aspiring powers in the nineteenth and twentieth centuries. She explores its role in China's border disputes in the South China Sea and with Russia and India; in diplomacy in the UN Security Council over Iran, Sudan, and Myanmar; and, in China's handling of challenges to the legitimacy of its regime from Taiwan, Xinjiang, and Japan.