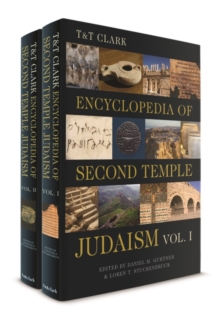 The T&T Clark Encyclopedia of Second Temple Judaism provides a comprehensive reference resource of over 600 scholarly articles aimed at those studying Judaism in the Second Temple Period, and the numerous texts and artefacts related to it. The work is split into four parts across two volumes. Part One locates the discipline in relation to other relevant fields (for example the Hebrew Bible, Rabbinics, Christian Origins) and provides an orientation to the discipline's distinctive nomenclatures and debates.

The history of research in the area is also presented in full. Part Two presents an overview of respective contexts of the discipline set within the broad framework of historical chronology.

Social/cultural, literary, linguistic, geographical, political, and religious contexts are all explained, from the time period of the conquests of Alexander the Great (332 B.C.E.) through to the reign of Hadrian (135 C.E.).

Part Three focuses specifically on the literature of the Second Temple period, summarizing the content of key texts, and examining their similarities and differences with other texts of the period.

The reception history of texts is considered. Part Four addresses topics, specifically those relevant to Second Temple literature such as places, practices, historical figures and artefacts.

The volumes include 14 specially created color maps and over 60 charts and illustrations.