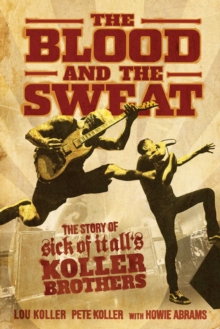 The Blood and the Sweat : The Story of Sick of It All's Koller Brothers Paperback / softback

When it comes to New York City hardcore, its community proudly boasts Lou and Pete Koller-brothers who have dominated the scene worldwide since 1986 with the aurally devastating Sick of It All as their vehicle. "One the best books ever written about hardcore, period..." -Decibel Magazine For Flushing, Queens natives Lou and Pete Koller, hardcore has become a lifestyle as well as an unlikely career.

From the moment these siblings began applying their abilities to punk's angrier, grimier sub-genre, they quickly became fifty percent of one of the most intense and compelling quartets to ever claim the movement-the legendary New York hardcore band, Sick of it All.

Contrary to popular belief, Lou and Pete are proof positive that you don't need to have lived a street life, or come from a fractured, chaotic home in order to produce world-class hardcore.

If Agnostic Front are the godfathers of New York hardcore, then vocalist Lou and guitarist Pete are its grand masters. The Blood and the Sweat is the no-holds-barred autobiography of two brothers who have never wavered, as well as an unrelenting depiction of the American dream, and the drive and determination required to live it-regardless of whatever obstacles appear before you.