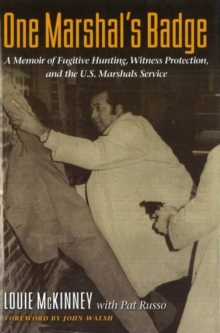 One Marshal's Badge : A Memoir of Fugitive Hunting, Witness Protection, and the U.S. Marshals Service Hardback

While many people are familiar with the U.S. Marshals Service's reputation from frontier days, when legendary lawmen such as Wyatt Earp and Bat Masterson enforced the Wild West, the agency's modern exploits are less well known.

One Marshal's Badge sheds light on the service's valuable role in current national and international affairs through the intriguing figure of Louie McKinney, the agency's former director.

McKinney's life is an inspirational story of personal fortitude and professional achievement.

Growing up a sharecropper's son in the segregated South, McKinney rose to become the first career deputy to lead the Marshals Service.

Prior to his promotion, McKinney contributed to the agency in many groundbreaking ways, including helping to restore order to the skies after a rash of airline hijackings in the early 1970s; guarding prisoner John Hinckley, the man who attempted to assassinate President Ronald Reagan, as a yearlong assignment; transporting criminals to trial and to prison in his own car before the creation of Con Air; enforcing the integration of Southern public schools as a black deputy marshal; and heading an innovative sting operation that netted hundreds of fugitives by enticing them with free football tickets. One Marshal's Badge offers a rare glimpse into the Marshal Service's inner workings, especially its witness protection program and elite SWAT team, and is an eyewitness account of the social turbulence that defined American history in the late twentieth century.