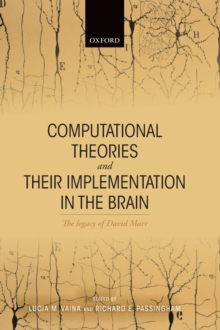 Computational Theories and their Implementation in the Brain : The legacy of David Marr Hardback

In the late 1960s and early 1970s David Marr produced three astonishing papers in which he gave a detailed account of how the fine structure and known cell types of the cerebellum, hippocampus and neocortex perform the functions that they do.

Marr went on to become one of the main founders of Computational Neuroscience.

In his classic work 'Vision' he distinguished between the computational, algorithmic, and implementational levels, and the three early theoriesconcerned implementation.

However, they were produced when Neuroscience was in its infancy. Now that so much more is known, it is timely to revisit these early theories to see to what extent they are still valid and what needs to be altered to produce viable theories that stand up to current evidence.

This book brings together some of the most distinguished scientists in their fields to evaluate Marr's legacy.

After a general introduction there are three chapters on the cerebellum, three on the hippocampus and two on the neocortex.

The book ends with an appreciation of the life of David Marr by Lucia Vaina.