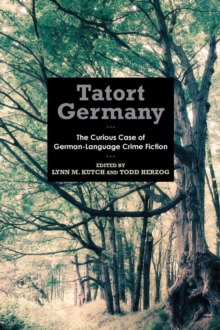 Although George Bernard Shaw quipped that "the Germans lack talent for two things: revolution and crime novels," there is a long tradition of German crime fiction; it simply hasn't aligned itself with international trends.

During the 1920s, German-language writers dispensed with the detective and focused instead on criminals, a trend that did not take hold in other countries until after 1945, by which time Germany had gone on to produce antidetective novels that were similarly ahead of their time.

German crime fiction has thus always been a curious case; rather than follow the established rules of the genre, it has always been interested in examining, breaking, and ultimately rewriting those rules.

It features innovative scholarly work that matches the innovativeness of the genre, taking up the Regionalkrimi; crime fiction's reimagining and transforming of traditional identities; historical crime fiction that examines Germany's and Austria's conflicted twentieth-century past; and how the newly vibrant Austrian crime fiction ties in with and differentiates itself from its German counterpart. Contributors: Angelika Baier, Carol Anne Costabile-Heming, Kyle Frackman, Sascha Gerhards, Heike Henderson, Susanne C.

Todd Herzog is Professor and Head of the Department of German Studies at the University of Cincinnati.