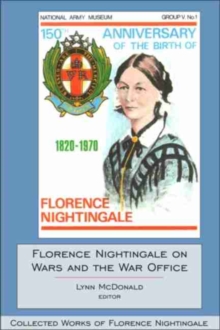 Volume 15 of the Collected Works of Florence Nightingale, Wars and the War Office , picks up on the previous volume's recounting of Nightingale's famous work during the Crimean War and the comprehensive analysis she did on its high death rates.

This volume moves on to the implementation of the recommendations that emerged from that research and to her work to reduce deaths in the next wars, beginning with the American Civil War.

Nightingale's writings describe the creation of the Army Medical School, the vast improvements made in the statistical tracking of disease, and new measures for soldiers' welfare.

Her role in the formulation of the first Geneva Convention in 1864 is related, along with her concern that voluntary relief efforts through the Red Cross not make war "cheap." Nightingale was decorated by both sides for her work in the Franco-Prussian War.

While much of her work concerned the mundane sending out of supplies, we see also in her writing her emerging interest in militarism as the cause of war.

Her opposition to the Afghan War (of her time) and her work to provide nursing for the Egyptian campaigns, the Zulu War, and the start of the Boer War are also included.