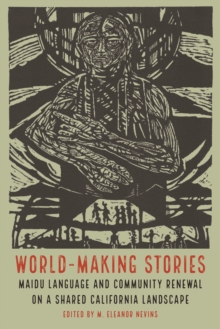 Published through the Recovering Languages and Literacies of the Americas initiative, supported by the Andrew W.

At the beginning of the twentieth century, renowned storyteller Hanc'ibyjim (Tom Young) performed Maidu and Atsugewi stories for anthropologist Ronald B.

Dixon, who published these stories in 1912. The resulting Maidu Texts presented the stories in numbered block texts that, while serving as a source of linguistic decoding, also reflect the state of anthropological linguistics of the era by not conveying a sense of rhetorical or poetic composition.

Sixty years later, noted linguist William Shipley engaged the texts as oral literature and composed a free verse literary translation, which he paired with the artwork of Daniel Stolpe and published in a limited-edition four-volume set that circulated primarily to libraries and private collectors. Here M. Eleanor Nevins and the Weje-ebis (Keep Speaking) Jamani Maidu Language Revitalization Project team illuminate these important tales in a new way by restoring Maidu elements omitted by William Shipley and by bending the translation to more closely correspond in poetic form to the Maidu original.

The beautifully told stories by Hanc'ibyjim are accompanied by Stolpe's intricate illustrations and by personal and pedagogical essays from scholars and Maidu leaders working to revitalize the language.

The resulting World-Making Stories is a necessity for language revitalization programs and an excellent model of indigenous community-university collaboration.