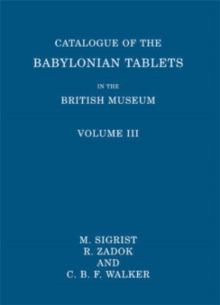 Catalogue of the Babylonian Tablets in the British Museum : Volume III Hardback

This catalogue is the third in a series publishing the whole collection of Babylonian and Sumerian tablets in the British Museum.

They include Sumerian tablets from the administrative archives of the district of Lagash of the time of the Third Dynasty of Ur, Old Babylonian tablets from the cities of Kisurra, Larsa, Sippar and Uruk, and tablets of the Neo-Babylonian and Achaemenid periods from Babylon and Borsippa. There is also a small number of literary and historical texts.