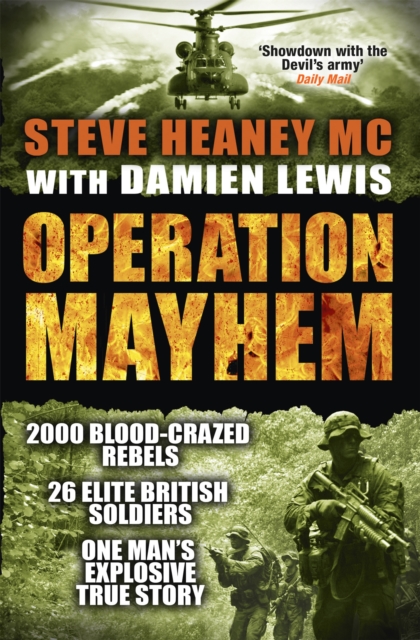 'Captures the confusion, black humour, raw courage and sheer exhilaration of combat brilliantly' THE TIMES'Read this account of his stint with the 26-man strong X Platoon in the sweltering jungle, living on grubs, outnumbered 80 to one, battling heavily armed rebels with bamboo sticks and home-made grenades, and you'll be asking the question...

Why wasn't he given TWO MCs?' SUNDAY SPORT2,000 blood-crazed rebels. 26 elite British soldiers. One man's explosive true story. Airlifted into the heart of the Sierra Leone jungle in the midst of the bloody civil war in 2000, 26 elite operators from the secret British elite unit X Platoon were sent into combat against thousands of Sierra Leonean rebels. Notorious for their brutality, the rebels were manned with captured UN armour, machine-guns and grenade-launchers, while the men of X Platoon were kitted with pitiful supplies of ammunition, malfunctioning rifles, and no body armour, grenades or heavy weapons. Intended to last only 48 hours, the mission mutated into a 16-day siege against the rebels, as X Platoon were denied the back-up and air support they had been promised, and were forced to make their stand alone.

The half-starved soldiers, surviving on bush tucker, fought with grenades made from old food-tins and defended themselves with barricades made of sharpened bamboo-sticks, tipped in poison given to them by local villagers. Sergeant Steve Heaney won the Military Cross for his initiative in taking command after the platoon lost their commanding officer.

OPERATION MAYHEM recounts his amazing untold true story, full of the rough-and-ready humour and steely fortitude with which these elite soldiers carried out operations far into hostile terrain.