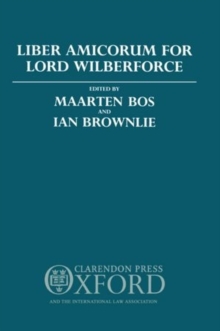 Lord Wilberforce is one of Britain's most respected and distinguished judges. He became a QC in 1954, a Judge of the High Court (Chancery Division) in 1961 and a Lord of Appeal in Ordinary in 1964, finally retiring from the judiciary in 1982. He was President of the International Law Association for twenty-five years and is currently its Patron. He has been involved with many judicial and non-judicial activities, including spells as a visiting Fellow of Linacreand Wolfson Colleges in Oxford. He is High Steward of the University of Oxford, and a fellow of All Souls College. To most lawyers Lord Wilberforce will be known for the clarity and extreme breadth of knowledge displayed in his judgements over the years. He is a gifted scholar who has contributed in innumerable ways to the growth and development of English law. As a commercial lawyer his work is well known, but he has played a part in recent developments in administrative law and not least in international commercial arbitration. The festschriften in this book include contributions from distinguished lawyers from around the world, including Lord Hailsham, Judge Elias, Sir Robert Jennings, Professor Goedhuis, Judge Eero Manner, Professor Nicholas Matte, Professor G.H.