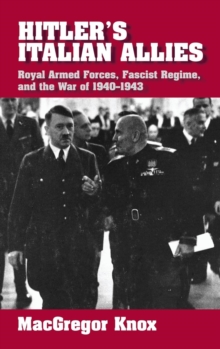 by MacGregor (London School of Economics and Political Science) Knox

Fascist Italy's ultimate defeat was foreordained. It was a pygmy among giants, and Hitler's failure to destroy the Soviet Union in 1941 doomed all three Axis powers.

But Italy's defeat was unique; the only asset that it conquered - briefly - with its own unaided forces in the entire Second World War was a dusty and useless corner of Africa, British Somaliland. And Italy's forces dissolved in 1943 almost without resistance, in stark contrast to the grim fight to the last cartridge of Hitler's army or the fanatical faithfulness unto death of the troops of Imperial Japan.

This book tries to understand why the Italian armed forces and Fascist regime were so remarkably ineffective at an activity - war - central to their existence.

It approaches the issue above all from the perspective of military culture, through analysis of the services' failure to imagine modern warfare and through a topical structure that offers a social-cultural, political, military-economic, strategic, operational, and tactical cross-section of the war effort.