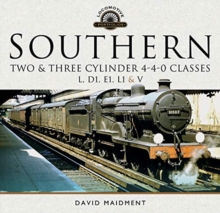 This book is one of the Pen & Sword Locomotive Portfolio series and covers the rebuilding by Richard Maunsell of the South Eastern & Chatham Railway 'D' and 'E' 4-4-0s as 'D1' and 'E1' locomotives with higher pressure boilers and long-travel valve events following the Churchward principles.

The book also covers the SE&CR 'L' class designed by Maunsell's predecessor, Harry Wainwright, with modifications made by Maunsell just before their delivery in 1914\.

Maunsell then designed a further 2 cylinder 4-4-0, the 'L1' for the Victoria - Folkestone 80-minute expresses of the mid-1920s and finally the 3-cylinder 'V' (the 'Schools' class), his masterpiece, for express services on all three constituent parts of the Southern Railway. Design, construction, operations and performance of these locomotives are described and profusely illustrated with over 300 black & white and colour photos from their construction right through to their final demise in 1962, together with an update on the three 'Schools' that have been preserved and operate on Britain's heritage steam railways.